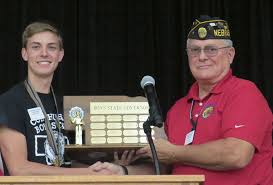 How well any food tastes depends entirely on how much the chef wishes to do their job. Whether these chefs are being compensated for their work or not should be inconsequential because of how important their job is to others. Cafeteria food is often considered a controversial topic; a topic that is valued by some and disliked by others. In the end, the most important aspect of cafeteria food is how healthy and nutritious it is for those consuming it.
The meals at Boys’ State range every day from pizza, burgers, and even chicken tenders. However, the variety is inconsequential because, in the end, all choices will give the nutrition that the citizens of Boys’ State need to be healthy throughout the week. The only negative possibility of the nutrition of the cafeteria food in relation to the health of the Boys’ State citizens is that certain citizens decide to be selective about what they would and would not like to eat. What a person chooses to eat and not to eat is their personal business. Regardless, all citizens of Boys’ State will find themselves walking many miles this week; these miles add to the necessary exercise regardless of the food consumed. In the end, the citizens of Boys’ State can rest peacefully knowing that an entire staff of well-trained chefs are here to make their Boys’ State experience as memorable as possible with generous buffets three times each day. 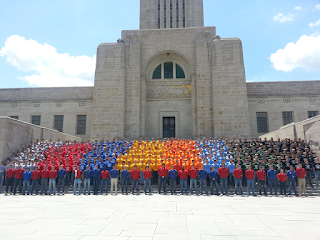 The town that is number eight in team rankings and number one in it’s citizen’s hearts is known by many as Bataan. However, that won’t be true for long as everyone knows there are certain actions that a team must take in order to be successful. The first is to carry out the basic task of establishing offices on the school board, the city council, and the legislature. Bataan held elections, as everyone does, on Sunday night. Bataan elected John Brockmeier of Kearney to govern this fair city as mayor. The city council members are Logan Rebbe, Casey Brentlinger, Kort Dye, Tyler Pester, and Victor Zamora. The senators of Bataan are Peter Owens, Noah Anderson, Noah Keck, Colby Sluka, Ethan Carlson, Riley Mrkvicka, and Shane Feller. Finally, the school board is comprised of Peter Emanuel, Sam Elgert, Michael Beck, Benjamin Rathjen, and Riley Backemeyer. The first meeting of the newly elected school board took place today in the lounge area of the 9th floor. At the meeting, concerned citizens raised alarms about numerous topics ranging from inappropriately named “awards” to curse laden rants from teachers. The final section of the meeting consisted of reports from the principals of the elementary, middle, and high schools. Then, the head of the school board brought the meeting to a close. Overall, if the rest of the week for the Bataan town goes this well, they may retake the glory they so rightfully deserve.

The citizens of Belleau Wood were certainly kept busy all throughout Monday as there were copious amounts of fun sessions to attend. Excitement had never been higher as the boys anxiously traveled to Kimball Hall for the joint session while expecting to meet up with delegates from Girls’ State. The exhilaration culminated during the interactive and insightful speech by Dr. Joanne Owens-Nauslar who taught the significance of personal health and well-being. The residents of Belleau Wood eagerly anticipate the opportunity to utilize this knowledge in hope to become better citizens, candidates, and leaders.