School Board and How it Works

Being on a School Board is a challenging, non-profit position in one’s community. Members must understand the board’s responsibilities, model effective principles of board governance, and create a collaborative relationship with the main administrating leader of education. Being part of the board comes with great stress and great responsibilities. As Winston Churchill put it, “The price of greatness is responsibility.” The function of a school board is to provide citizens with control over local education. This comes down to the board having to represent all the citizens in the entire school district the board resides.

The main responsibilities a school board deals with are: employing a superintendent, holding him or her responsible for controlling the school district in regards to the state law, identifying and adopting educational goals for the school district, and engaging the community in discussion about future student learning. Board meetings start with a Call to Order (Explains the agenda), announcing an Open Meeting’s Law (Requires that all meetings are open to the public), publicizing the meeting, then doing a Roll Call of Board Members. This is followed by all in attendance reciting the Pledge of Allegiance. Then the fun begins! The agenda of the meeting commences and the staff and student presentations start. After all that concludes, public input is then recognized and considered. Then the Board comes to a final conclusion and enforces it in their school district.

Beginning around noon on Sunday, May 31, 2015, buses, minivans, and cars of all kinds arrived at Harper Residence Hall on the campus of the University of Nebraska-Lincoln, delivering just under 400 delegates from all corners of the state for the 2015 session of Cornhusker Boys’ State.

2015 marks a special milestone for the program: 75 years of maintaining the standard of excellence set by Nebraska’s Premiere Leadership Program. With a full lineup of speakers, hands-on events, and political immersion ahead, the 2015 Session promises to once again deliver what many delegates describe as “an experience of a lifetime.” 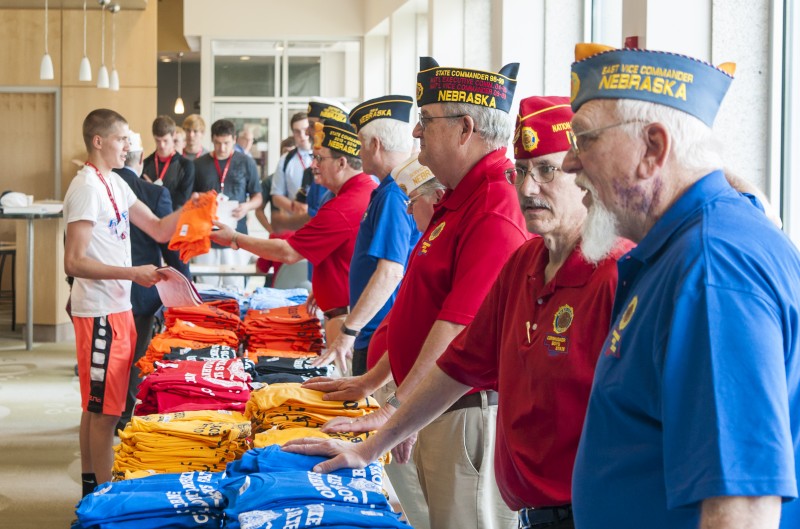 Above: Delegates arrive and are greeted by members of the American Legion. 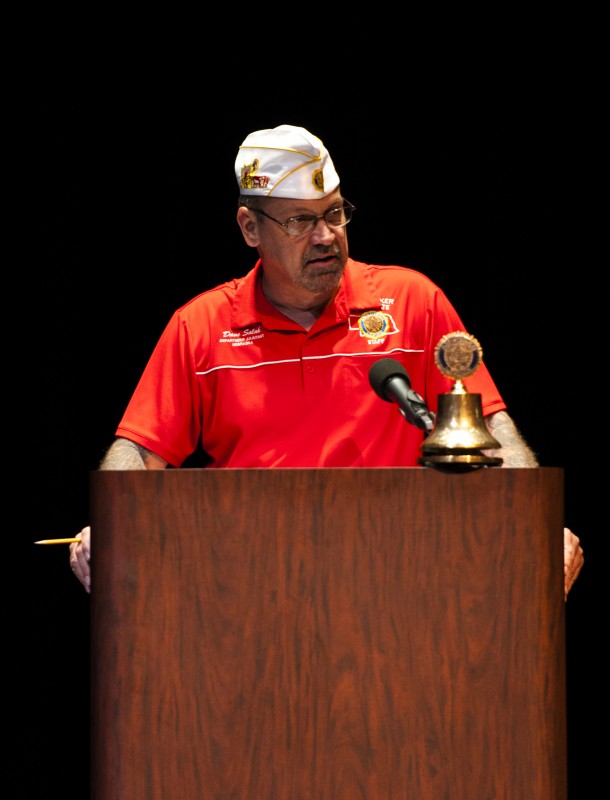 Above: Dave Salak, Secretary, Department Adjutant, welcomes the delegates with the ceremonial ringing of the bell. 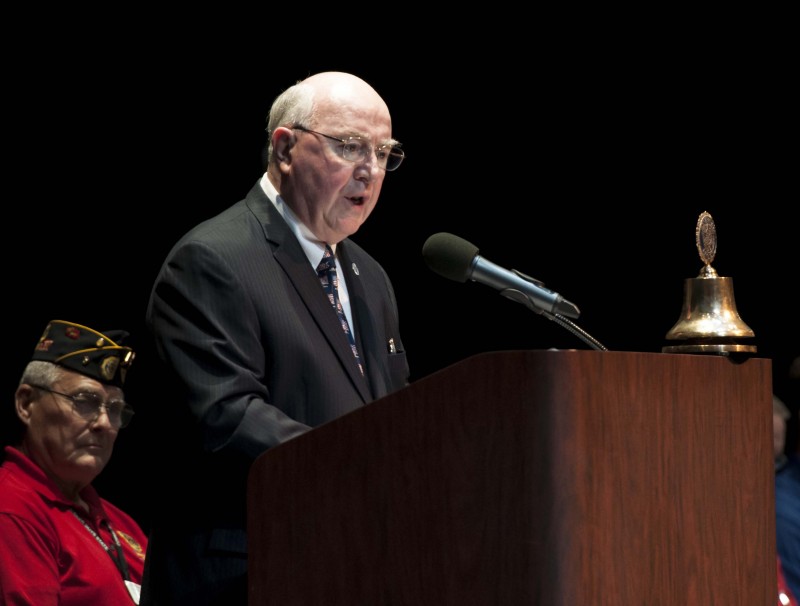 Above: Nebraska Secretary of State John Gale welcomes the 2015 Delegates.

The day is finally here: It’s the beginning of the American Legion’s Cornhusker Boys’ State Program, and both the apprehension of being in a new environment and the excitement of what’s to come run rampant. Hopefully, the apprehension will be long forgotten over the course of the week, as Boys’ Statesmen become immersed in the variety of activities that the program has to offer. The more politically active Boys’ Statesmen will look forward to the intensive amount of political activities that occur, as well as the amount of governmental offices that will be available to run for. Those interested in athletics can look forward to many organized team sports such as softball, basketball, football, and volleyball, as well as an organized pentathlon and track and field competition. Eager journalists can find solace in the fact that there is a very active newspaper staff that is part of the program. At the end of the day, every Boys’ Statesman shall be able to anticipate an extremely active, educational, and an overall fun experience being part of the program.

On May 31st, 2015, 400 boys embarked on a journey which could potentially define who they are for the rest of their lives. For most boys, the journey to get here began very early. The trials and individual stories each young man brings to the table makes Boys’ State unique. However, the trip to become a Boys’ Stater is harder than most would think.

To get this far, high school junior boys across Nebraska apply either by themselves, or a school nomination. The application is the easiest part of the process. After a committee looks over the applicants qualifications, they interview selected applicants. In my case, there were 6 boys given the opportunity to get interviewed. Following many questions, representatives were selected and were sent to an orientation months later. In the weeks between orientation and May 31st, contestants had the chance to decide a position they would like to run for. For many, including myself, the decision was made to try for a higher office. With months of preparations now being behind us, I believe that everyone is ready. The wait from that mid-December night are now over. Let’s get this started.

Some came to Boys’ State with ambitious plans of running for Governor. Others came solely with a goal to gain knowledge about the state political system. Still more came with little background information of how Boys’ State functions. Regardless of our motives for coming to Boys’ state, we must all push ourselves to a new limit.

Branching out of one’s comfort zone looks different for everyone. A more introverted person might find it nerve-racking to start up a conversation with a stranger. At the same time, other people may find it difficult to try a new sport they’ve never played before. In the end, everyone can have rewarding experience from Boys’ State, as long as they strive to get out of their comfort zone.

It’s day one of the 2015 American Legion Boys’ State conference and it has already been a busy day. A massive flow of incoming Boys’ Staters have arrived and have experienced a gracious and exciting welcome from the American Legion and Boys’ State staff, with various speeches from the Secretary of State, last year’s Governor, and past Boys’ State participants, among others.

The speakers discussed their past experiences with the program and have extended many words of encouragement and motivation to the incoming participants to do their best to have fun and to put into the program what they can, in order to get the most out of their experience. Many of them have arrived with thoughts of confusion or simply being unsure of what to expect. However, the speakers have provided information on what to expect for the week, involving intense sports tournaments, joint sessions with the Girls’ Staters for band and choir concerts, and even a trip to the state capitol.

With the given information, Boys’ Staters can have some sort of relative idea of what to expect and look forward to all the activities they will partake in. Each Boys’ State participant will be able to have an exciting and busy week, having a great time if a positive attitude is maintained. The week has started with a bang, so it is up to the Boys’ Staters to finish off the rest of the week as such. A week packed full of activities and lasting memories is ahead!

Upon arriving at Harper Hall, Boys’ Staters and their parents were bustling about. The boys were scrambling to find their floor and room assignment with the assistance of their parents and the Boys’ State Councilors. The nervousness and excitement, as well as the anticipation, hung in the air in the lobby. Parents helped their sons haul their luggage up to their rooms and said their final goodbyes for the week.

Once luggage was taken to the rooms, the boys checked in and changed into their designated t-shirts and went to the lounge on their floor. Slowly, the chaos of check-in and finding rooms subsided and ice-breaker activities began to fill the void in the lounges on each floor. Councilors introduced themselves and told interesting facts about themselves. As boys arrived, each was encouraged to share their name, town they are from, what college they plan to attend in the future, and finally an interesting fact about themselves.

After the ice-breaker activities concluded, the boys signed up for various sports activities as well as choir, band, and newspaper positions. The next adventure presented to the boys was lining up in three equal rows and taking a brisk walk to the auditorium for orientation and opening ceremony. The boys listened to various speakers, including the past year’s Boys’ State Governor, who told about what will happen the rest of the week.

Time and time again we have all heard the Legionnaires emphasize the opportunities, goals, and outcomes that you can take away from Boys’ State. Leadership, civic service, and friendship are just a few things that have been explained to us as the next generation of Boys’ Staters. The opportunities are endless we are told, but what does this spell for all of us?

The doors that are opened here at Boys’ State allow for all of us to go on an endless journey where the thrill never dies. We have heard from former Boys’ Staters and keynote speakers that these opportunities are limitless and that we, as individuals, are only confined by ourselves. We have seen firsthand the people that Boys’ State has created: actors, coaches, and national and international leaders. This is where you can go as a person; you can even go further than those before. 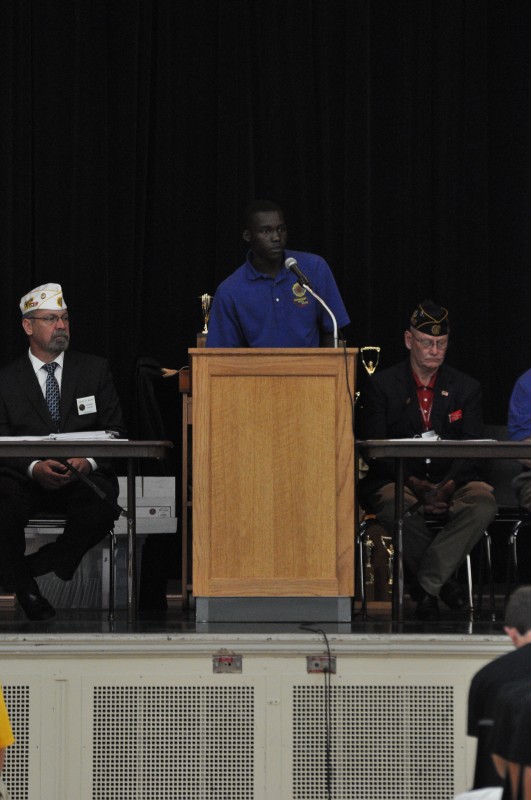 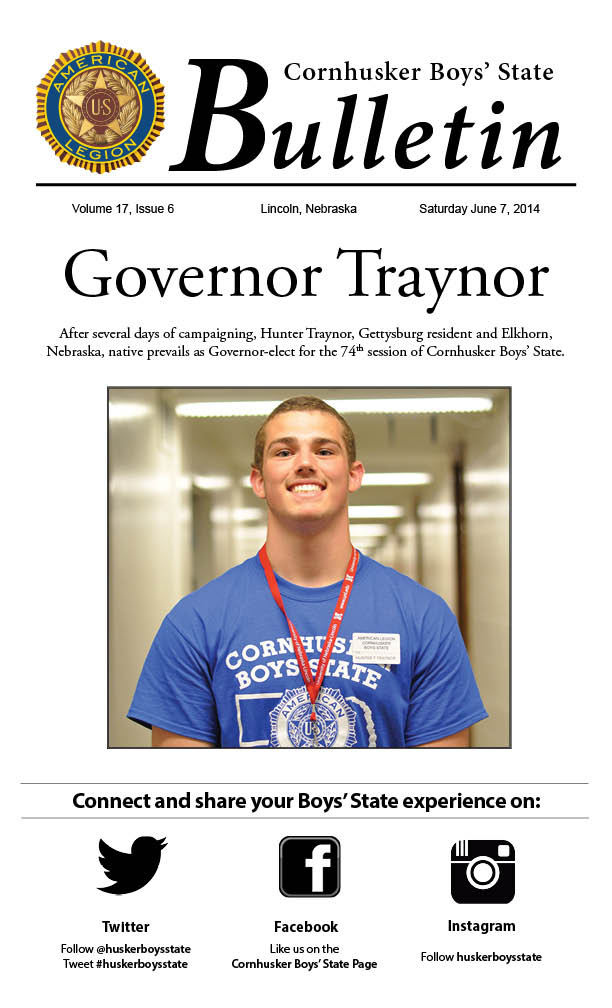