Citizens and candidates had the opportunity to meet with representatives from the various political action committees of Cornhusker Boys’ State this morning. Citizens were able to get a feel for the interests of the different groups and make contributions as they saw fit. Candidates had slightly different objectives, seeking out support from the PACs, who can make campaign contributions or assist with the campaigns themselves. 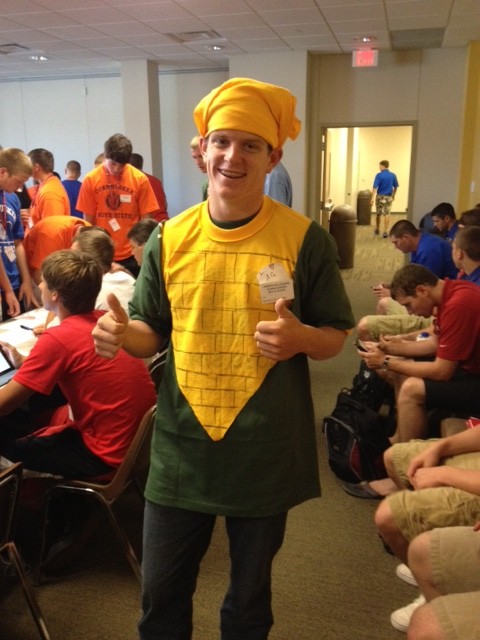 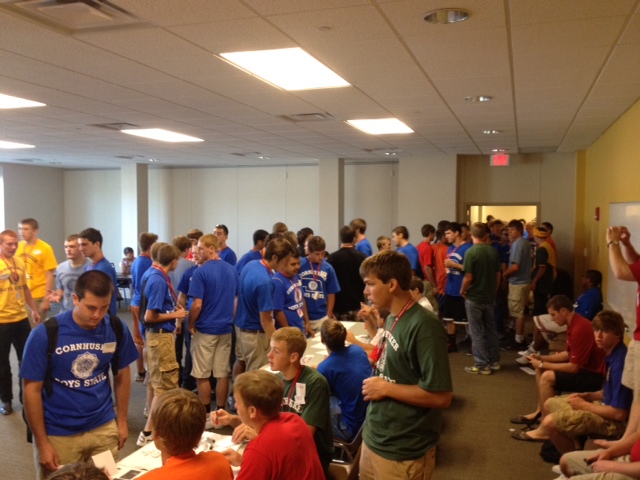 Click on the image below to open Wednesday’s edition of the Cornhusker Boys’ State Bulletin. 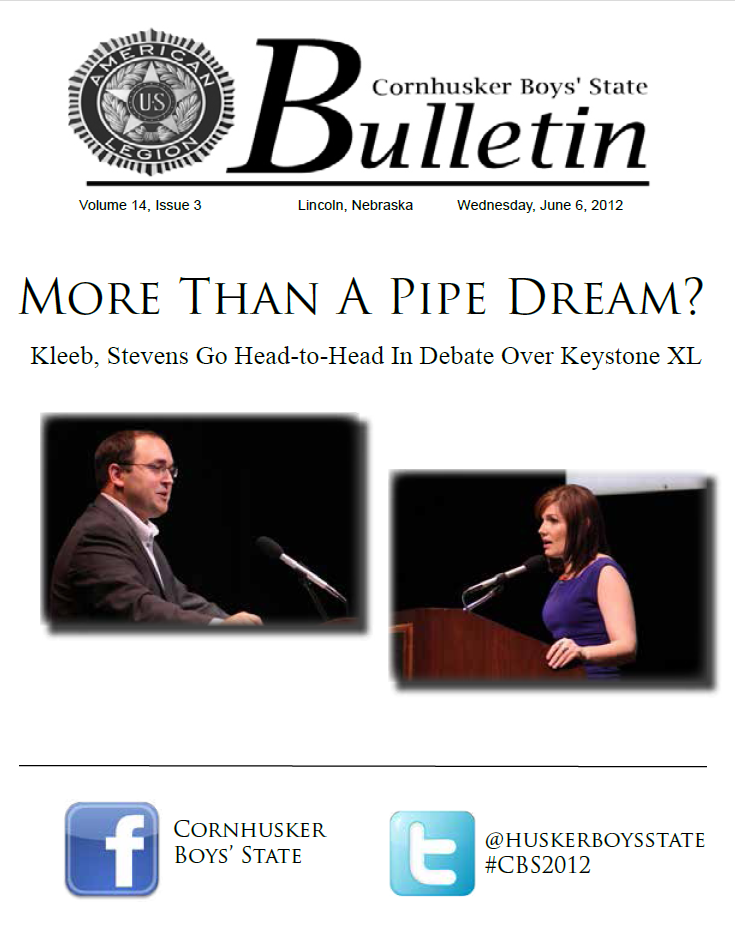 On Tuesday evening, Brad Stevens of Americans for Prosperity and Jane Kleeb of Bold Nebraska visited a joint delegation of Cornhusker Boys’ State and Girls’ State to debate for and against, respectively, the construction of TransCanada’s Keystone XL Pipeline through the state of Nebraska. The debate was moderated by Omaha’s KETV News Anchor Rob McCartney. Brad Stevens staunchly supports the construction of the Keystone XL Pipeline, stating that it is a “safe project” with “economic benefit,” and will create 20,000 jobs for Nebraska. Jane Kleeb countered his arguments, stating that the proposed route of the Keystone XL Pipeline is not the “safest route,” but rather is the “cheapest route.” Rather than crossing the Missouri River, Kleeb noted that the proposed route brings the pipeline across several other water sources for the state of Nebraska, including the Platte River and the Niobrara River. Kleeb went on to state that the number of jobs in the region may increase during the construction phase, but that those jobs are only temporary, and will shrink drastically after construction, when the focus will be solely on maintenance. 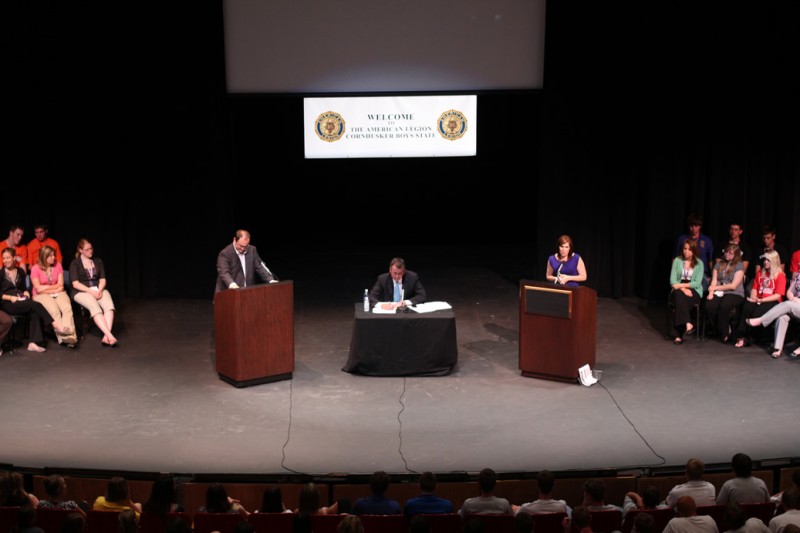 Stevens assured the delegation of the safety of the project, citing the track record of existing pipelines running through our state. He also noted that should disaster strike, the potential for it to be of high damage and destruction is extremely low due to the thick, unrefined texture of the crude oil. A leak, he says, would be in terms of yards, not miles; such viscous material is unable to leak with significant velocity. Stevens further alluded to the safety of the project saying that compared to the other pipelines in Nebraska, this one would be more sophisticated in nature, with electronic sensors, and newer, thicker sections of pipe. Kleeb was skeptical as to the integrity of the pipe, as the production would be outsourced and imported into the United States. She also voiced concerns with regards to the intended purpose of the crude being moved through the pipeline. According to Kleeb, this oil would be refined outside of the United States and then exported elsewhere, therefore interrupting the supply and demand of fuel within our borders. Her logic reasons that since gas prices are set regionally and this pipeline would divert oil out of the Midwest, supply in this region would decrease, thus driving up fuel costs. Stevens expressed his doubts as to whether or not the fuel would be exported to other countries and continents, arguing that it just wouldn’t be a practical approach for TransCanada. 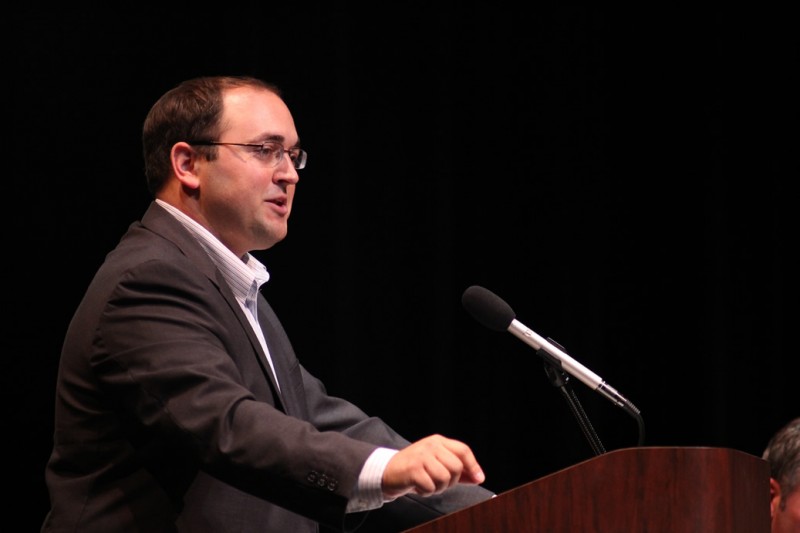 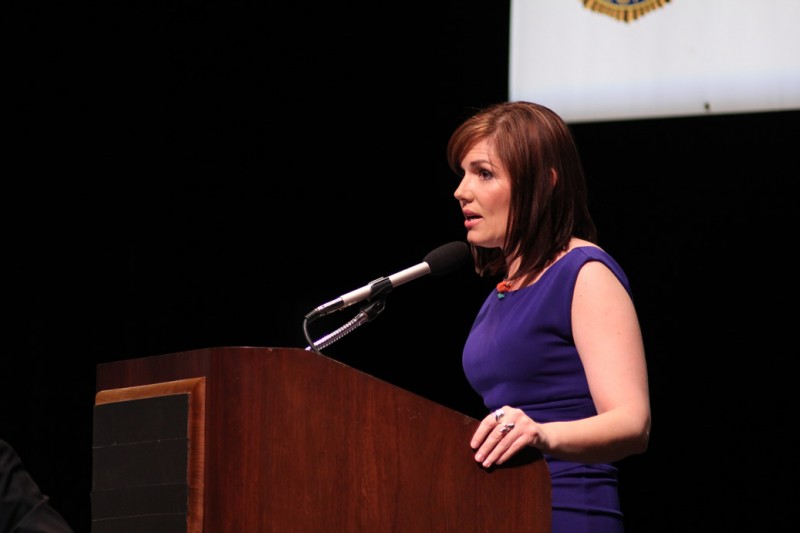 In summary, Stevens feels that the benefits for jobs and the economy strongly outweigh the risks, while Kleeb feels that this project could jeopardize our agricultural land and water supply and is not worth the risk. 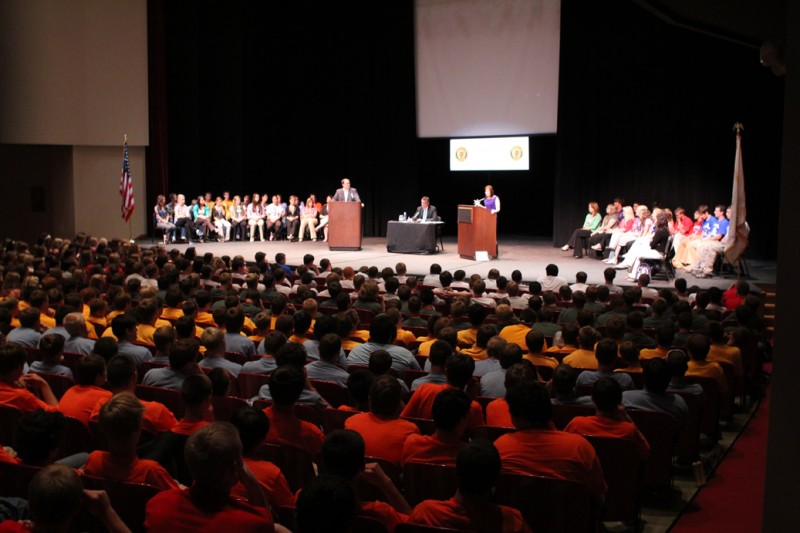 This evening, after the conclusion of Keystone XL Pipeline debate, the joint session of Boys’ & Girls’ State was treated to an address by former Senator Robert Kerrey. 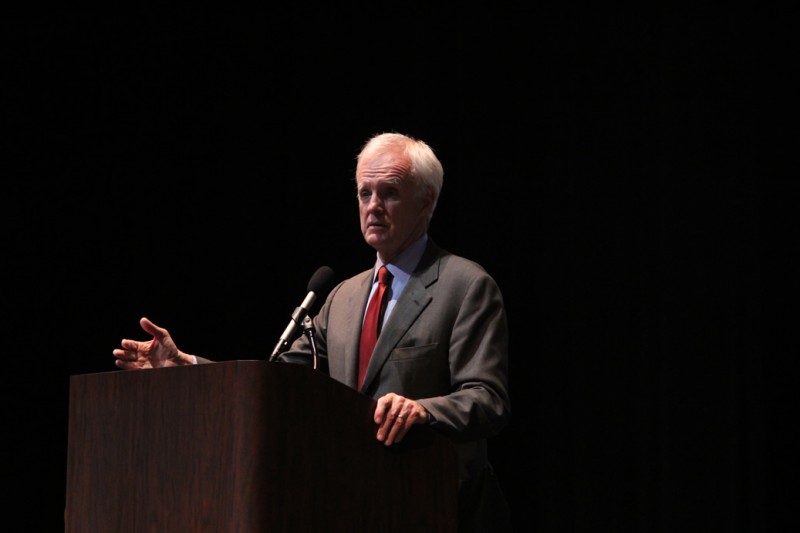 Kerrey began his presentation by sharing a little about his past.

Kerrey was born in Lincoln, NE, attending Lincoln Northeast High School and the University of Nebraska-Lincoln. A Navy SEAL during the Vietnam War from 1966-1969, Kerrey was wounded in action, losing part of his leg. For his heroic service and sacrifice, Kerrey was awarded both the Congressional Medal of Honor and the Bronze Star. He moved back to Lincoln in 1969  to recover from his debilitating injury. He credits the American Legion and American Legion Auxiliary with putting his “life back together” during this painful and difficult time of loss. In 1973, Kerrey started a small business, which served as the springboard for his long career as a businessman and politician.  He served as the 35th Governor of Nebraska from 1983 to 1987 and represented the State of Nebraska in the U.S. Senate from 1989 to 2001. Kerrey has most recently served as president of The New School, a distinguished university in New York, New York. Though he has not held public office since 2001, in February of this year, Kerrey announced his bid for the Senate seat currently held by the retiring Ben Nelson. 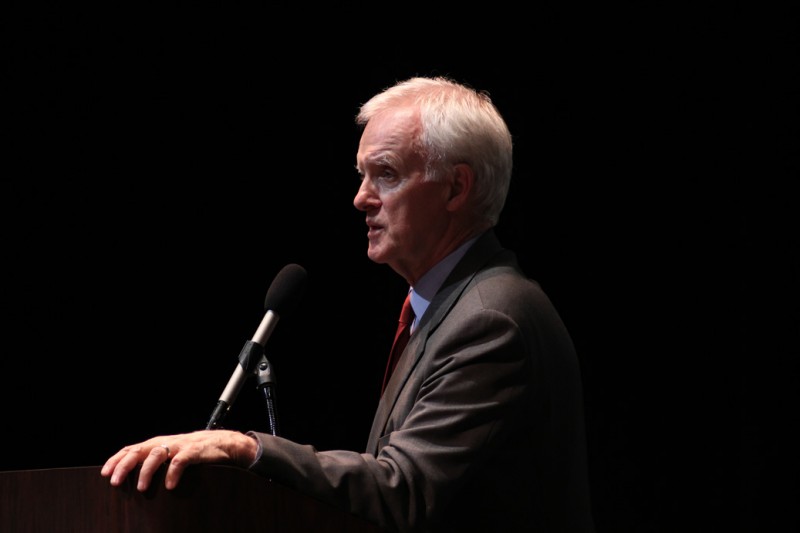 From these numerous trials and tribulations, Kerrey gained an incredible amount of life experience, wisdom, and perspective, which he shared with the delegates:

The measure of a man involves whether or not you let someone help you or love you.

“A true friend is one who helps, not just when it’s convenient, but also when it’s inconvenient.”

“I have a considerable amount of hope in our future based on what I see here this evening.”

When a delegate asked him about his greatest loss, Kerrey replied, “The physical loss [of my leg]. I have the capacity for sympathy now…The easiest day of your life was yesterday. Come to terms with how you deal with loss; don’t focus on the things you can’t do.”

About the ability of the government to create jobs, Kerry stated, “The only jobs a government can create are government jobs.”

When asked about his greatest achievement, Kerry said that he was very proud of his using “public power to help an individual fighting the bureaucracy.” As an example, he cited his role in the Normalization of Vietnam in 1989, a movement which returned American POWs and Vietnamese refugees to their respective homelands.

Another delegate asked him about why he chose to enter politics; Kerrey replied, “There are politics in any organization,” and went on to explain how a class he taught on the history of the Vietnam War inspired him to run for a seat in the Senate. The inspiration for his current bid for the Senate came from the Deficit Crisis and Social Security and Medicare instability, saying, “I think I know how to balance the budget.”

When another delegate asked him about his views on the Keystone XL Pipeline, Kerrey stated, “TransCanada made a terrible mistake by routing [the pipeline] over the [Ogallala] Aquifer, and enacting eminent domain to gain access to private lands.”

Concerning GLBTQ rights and marriage equality, Kerrey boldly stated, ” I believe that individuals are born gay or straight and are entitled to the same treatment [as heterosexual individuals].”

About Bi-Partisan cooperation, Kerrey said that, “you just gotta do it…you gotta be willing to make people in your party angry with you.” 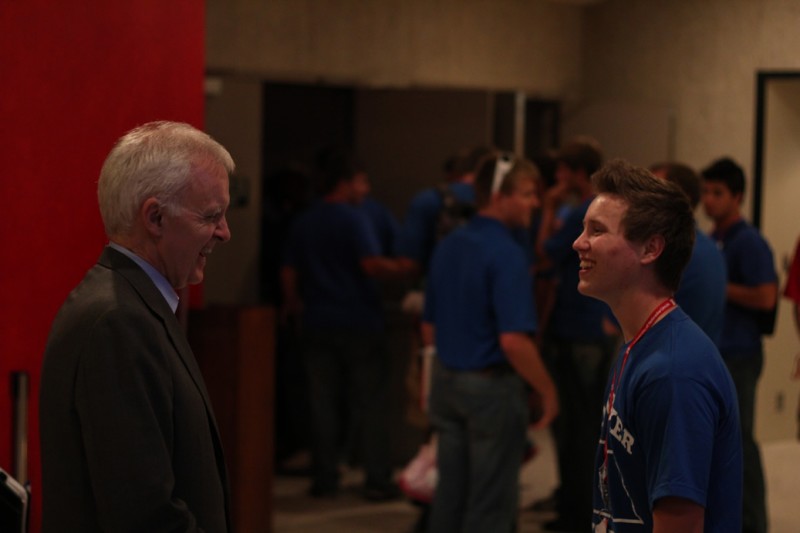 About his morals, Kerrey said that he models his behavior on the Golden Rule.

The last, and possibly most profound, piece of wisdom Kerrey offered the delegates was the idea that, “there is nothing more powerful than human kindness.”

Overall, Senator Kerrey showed the strength and experience of his leadership, as well as his wisdom and humility, qualities that each Boys’ or Girls’ State delegate can put into practice into his or her daily lives in their roles as citizens and future leaders of our State and our Nation. 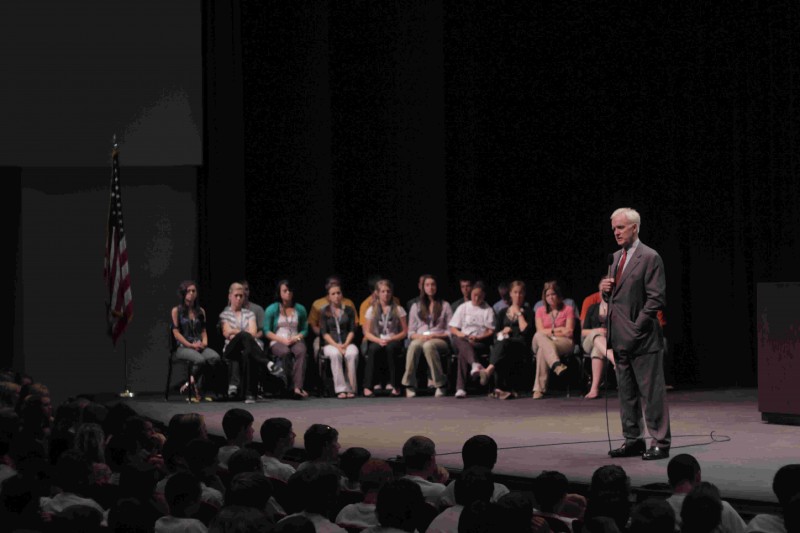 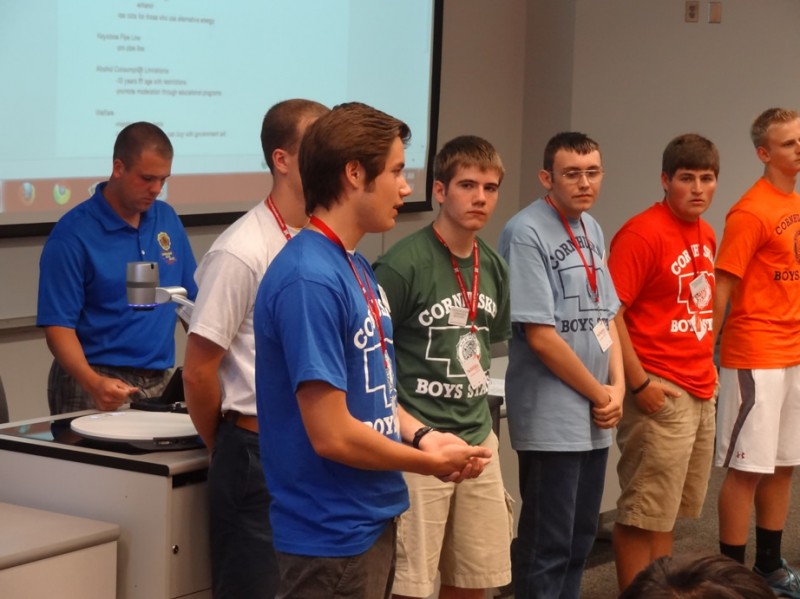