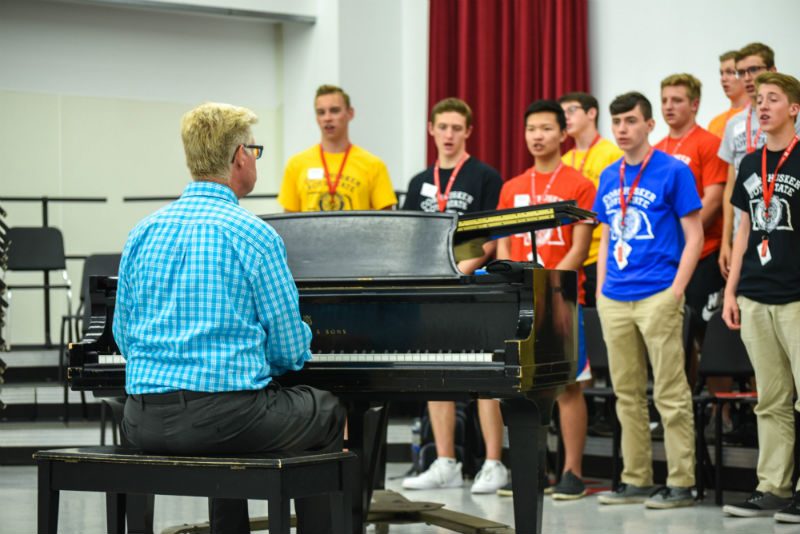 The 2018 Cornhusker Boys and Girls State choir met for the first time today. Under the direction of Dr. Peter Eklund, the chorus will perform at the Wednesday evening session. Activity time is a highlight of the week.  In addition to chorus, Boys State offers band, journalism, football, softball, sand volleyball, basketball, and track.

Boys’ and Girls’ States Gather for a Band and Chorus Extravaganza

For the male delegates, the evening really began with the arrival of the brilliant young women of Cornhusker Girls’ State:

Sitting in alternating  rows, the delegates sat eagerly awaiting the festivities. The wait was pleasantly shortened by an impromptu pep song and dance routine by the band. Their lively rendition of Hey Baby soon had the audience on their toes tapping and clapping to the music:

Taking the stage, the band performed a variety of classic and contemporary tunes, including many soloists, and finished with a stirring rendition of Dear Old Nebraska U:

The chorus then took the stage and wowed the audience with its collective display of vocal talent, including a number of soloists. Their closing performance of an American tribute medley brought the audience to its feet:

The evening concluded with an address by Nebraska Governor David Heineman. Click the photo below to read the article about his evening address to the delegates.