On Friday evening, Governor Larsen signed all bills passed by the Cornhusker Boys’ State Legislature during the week of June 3rd. These bills hereby become the law, and with no vetoes by Governor Larsen, no more voting is necessary for these bills to be enacted. 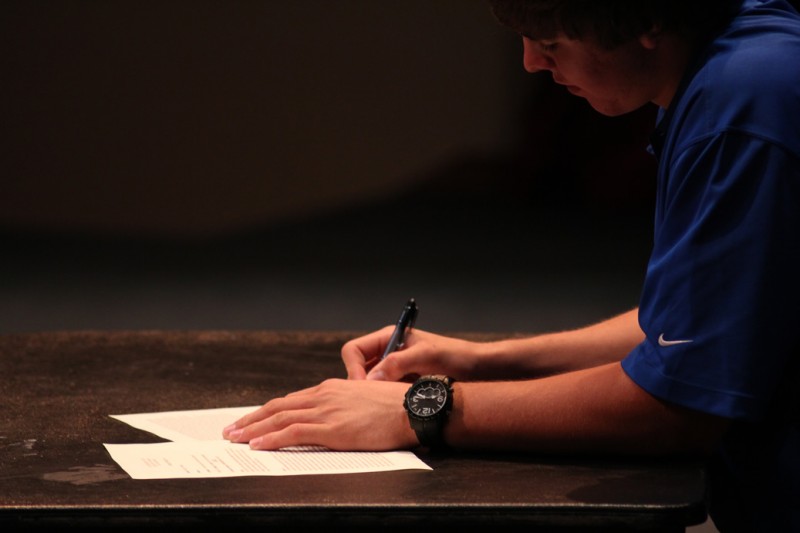 Speaker of the Legislature Addresses Delegates

Speaker of the Nebraska Legislature Mike Flood addressed Cornhusker Boys’ State delegates on Thursday evening to give them a practical framework and knowledge of how Nebraska’s unicameral legislature works. Senator Flood explained how there are forty-nine Senators in the Nebraska Legislature representing forty-nine districts in Nebraska, each consisting of approximately 37,000 people. He went on to discuss the workings of the legislature. In odd years, legislators spend 90 days in the legislature, and in even years, 60 days. To pass legislation in the Unicameral, twenty-five votes are needed, and thirty are required to overturn a Governor’s veto. As speaker, Flood is responsible for enforcing rules and ensuring that proper procedure is followed. After discussing this infrastructure, Flood went on to briefly address some of the recent issues considered by the State Legislature, including the budget, the death penalty, and the Keystone XL Pipeline. 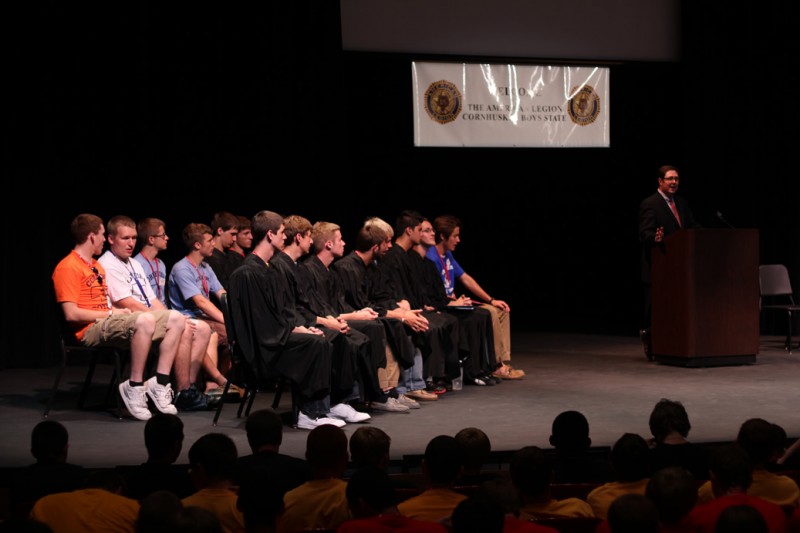 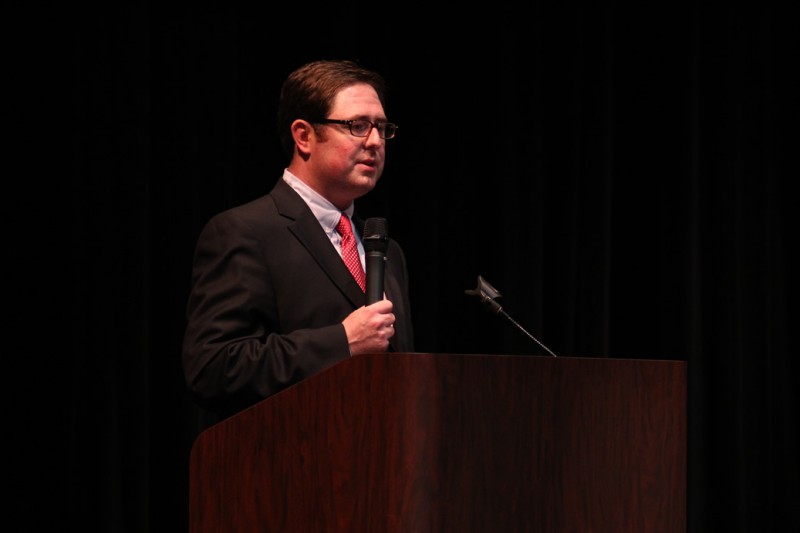 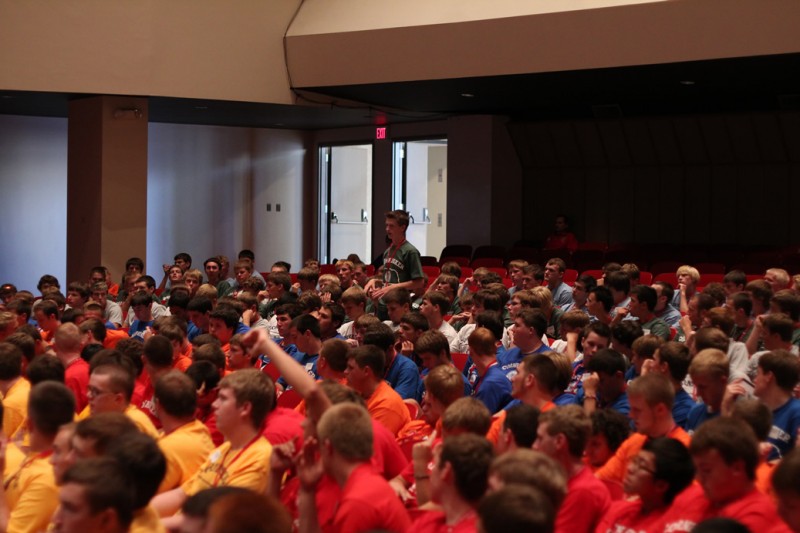 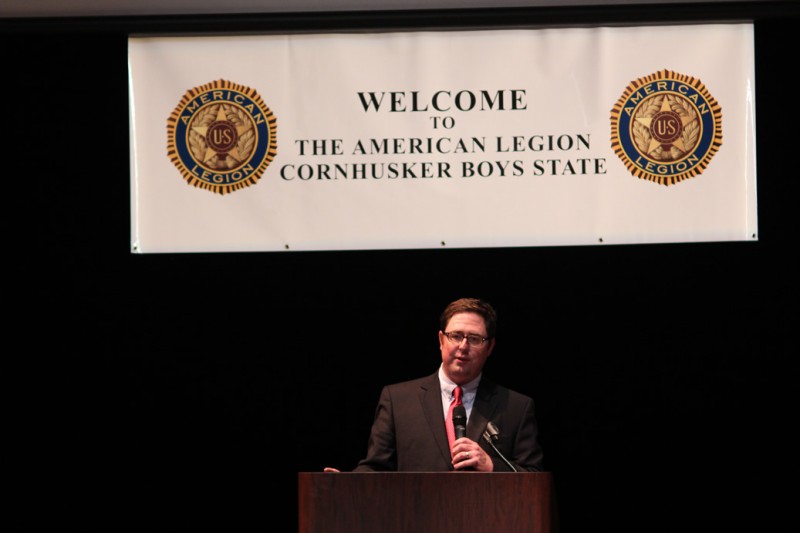 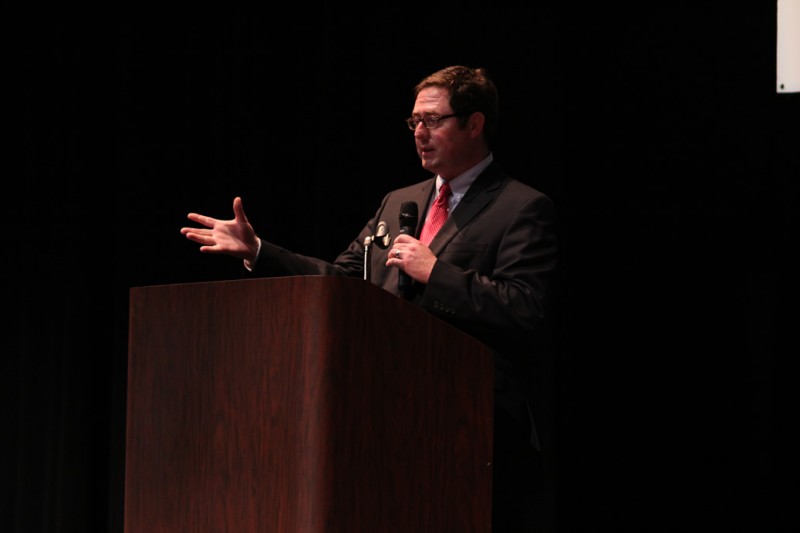 Despite legislative gridlock for the past two days, LB65, authored by House Speaker Bob Leddy of Gettysburg, was passed by the Cornhusker Boys’ State Legislature on Thursday afternoon. Pending approval by Governor Larsen, this bill would create an “Energy Independence Commission” and establish efficiency standards for Cornhusker Boys’ State. Other bills debated on Thursday include LB135, which would legalize gambling in the state, and LB14, which would allow off-road vehicles to be driven in forests and parks near Chadron. LB135 was passed and is pending Governor Larsen’s signature; no updates yet on LB14. 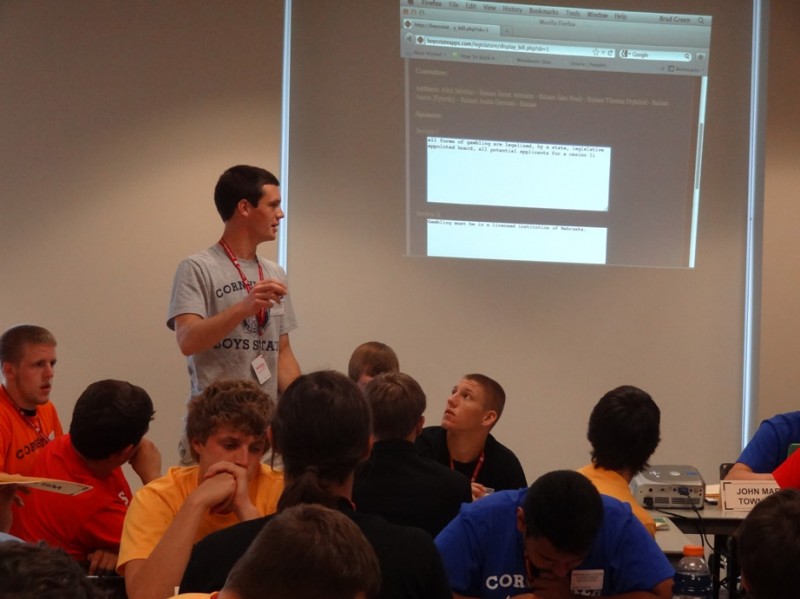 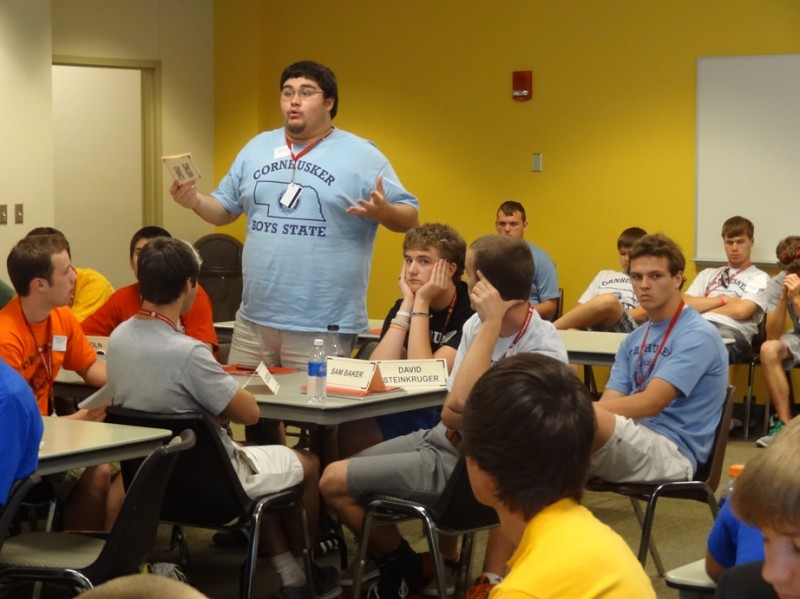 On Wednesday afternoon, the Cornhusker Boys’ State Legislature debated pending legislation on a number of topics, including energy independence, gambling, and wireless device usage while driving, among others. On Friday, Governor Larsen will sign or veto all passed bills in front of the entire delegation of Cornhusker Boys’ State. Photos from today’s debate are below. 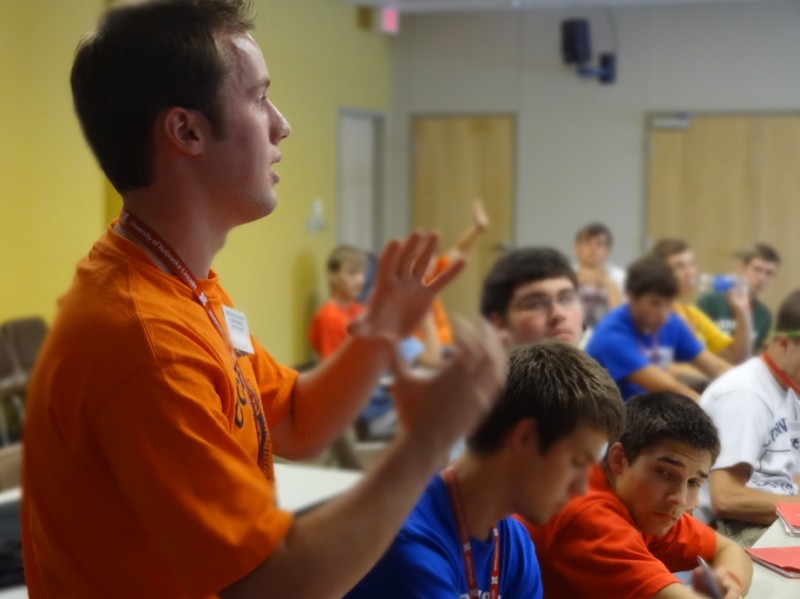 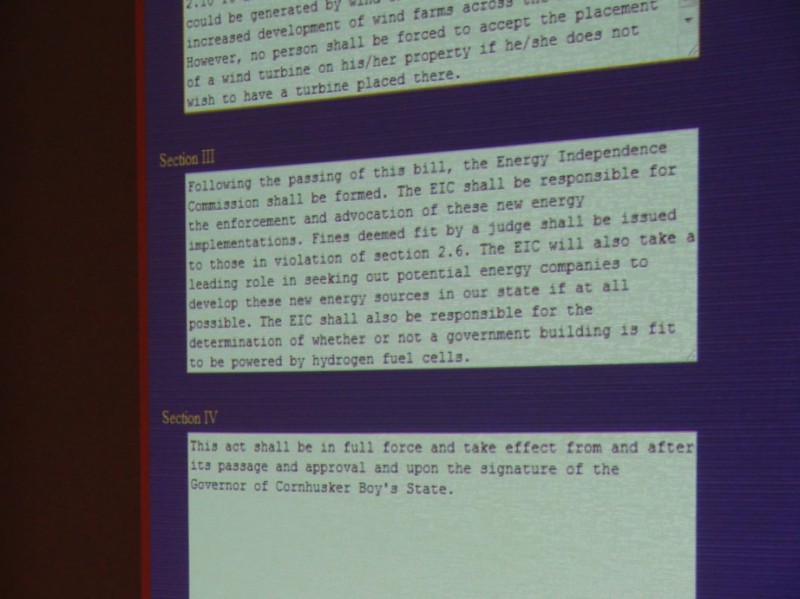 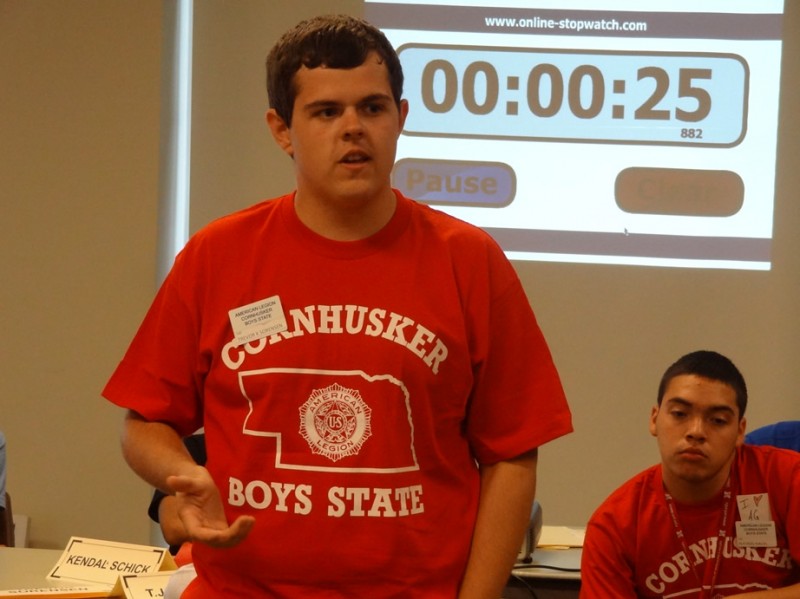 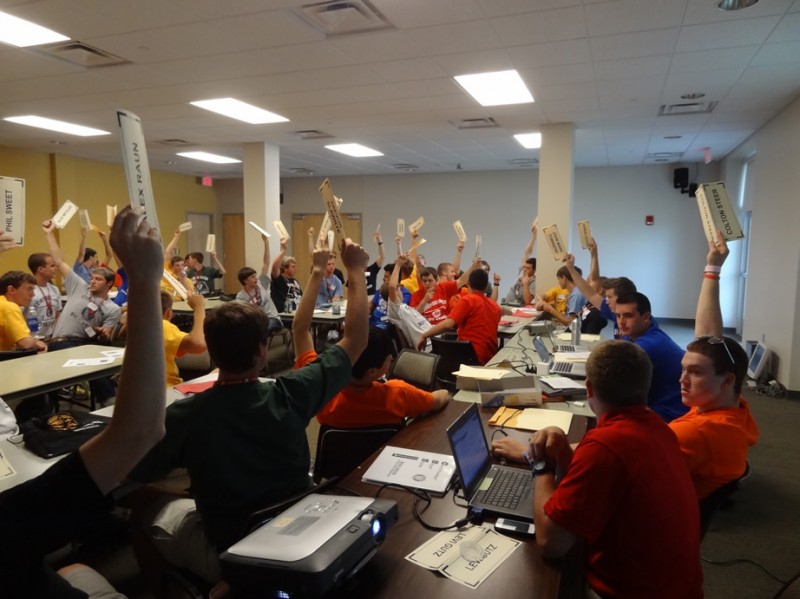 Earlier this morning, Senator Tony Fulton of Nebraska’s twenty-ninth district met with the winners of yesterday’s state senate races to discuss the inner workings of Nebraska’s unicameral legislature. The purpose of this session was to prep newly-elected senators for their role within the legislative branch of the Cornhusker Boys’ State Government. Among the topics discussed were committees, appropriations, and state economics. 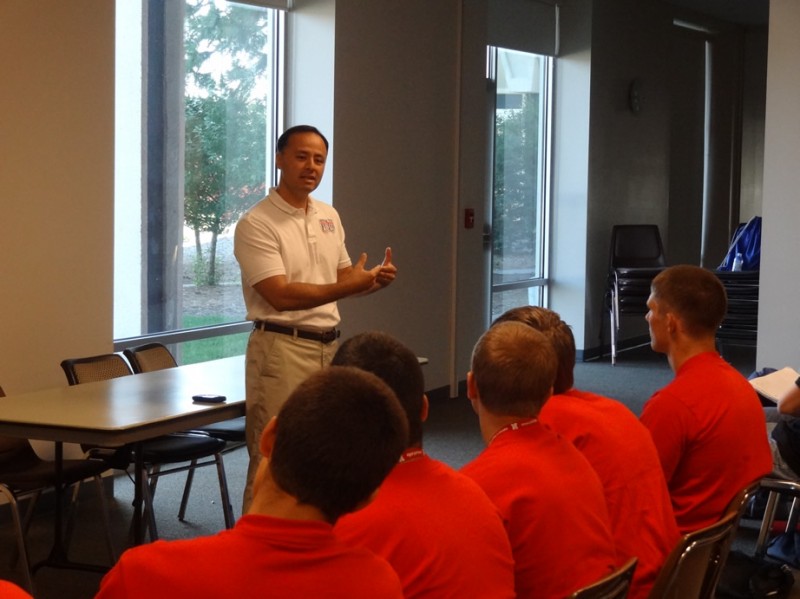