City election results are in! Here are the winners of Gettysburg elections. 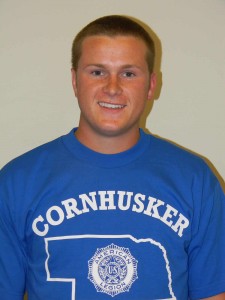 Gubernatorial Candidates Face Off in Kimball

Earlier this morning, gubernatorial candidates Logan Baker and Nick Schreiner sqaured off in a debate for the position as Cornhusker Boys’ State Governor 2011. Here are 15 highlights of the debate.

2. On the subject of money laundering, Nick Schreiner commented that he disapproves, and says that he’s talked to counselors to verify legitimacy in all of his actions. Logan Baker commented on how he gave most of his money away to other campaigns, but is happy he made it past the primary with very minimal advertising.
3. Both candidates are pro-life.
4. Nick Schreiner’s favorite President is Ronald Reagan because of his boldness in taking risks everyday, especially in the Cold War. Logan Baker’s favorite Presidents are Republicans (as he supports their agenda), notably the Bushs.
5. Both candidates are against gay marriage.
6. Logan Baker believes that illegal immigrants need t

o be deported and restricted from re-entering the country.
7. Nick Schreiner believes that capital punishment is a tool of justice. When asked about his conflicting pro-life and pro-capital punishment views, he respon

Earlier this evening, gubernatorial candidates Nick “Nick-It” Schreiner and Logan Baker held a small town hall debate, before their full hour and a half debate tomorrow in front of the entire delegation. Below are some of the statements and stances by the candidates.

Logan Baker: favors the 2nd Amendment and gun rights, believes in the importance of education, and supports advancing green energy throughout the state

Nick “Nick-It” Schreiner: strongly favors the implementation of nuclear energy and suggested tax incentives for doing so, believes that immigration reform is very necessary (especially at the federal level), pro-life

Q: How do you plan to combat rising crime in areas like North Omaha?

LB: Every person has the right to carry a gun. However, we must make sure that people have gone through proper testing to carry a concealed firearm.

NS: As many people who commit crimes are younger, I think we need to trace this back to our schools and re-evaluate programs within them. Instituting government programs that promote student-parent involvement communication could be a significant contribution.

Q: What if the parents refuse to intervene or if the student refuses to participate in an intervention such as you [Nick Schreiner] mention?

NS: Unfortunately, not every home is perfect. In situations like these, we need to look to our education system to create comparable programs.

LB: If a student’s parents won’t support them, it is the responsibility of the education system to intervene.

Q: What are ways for small town schools to attract good teachers?

LB: My school entered 1 to 1 program where students each got laptops. Teachers will teach better through the use of technology like this.

NS: Getting good teachers is difficult when competing against bigger cities and higher-paying jobs. Money given to schools for lobbying can be used to create better offers for teachers. This is a financial issue.

Q: There was a legislative bill that was shot down that would require those who have received DUIs and other alcohol related offenses to install breathalyzer starters on their vehicles that will restrict the starter when a 2.0 or higher is blown. Do you support a bill like this?

NS: I’d need to do more research. If this goes against liberties, we’d have to evaluate it.

LB: I would pass it because I’m against underage drinking. People shouldn’t be on or near roads when under the influence of alcohol.

NS: I agree with Logan up to a point, but we have to be careful.

Q: I’ve written a bill on including women in the draft. What is your view on this issue?

LB: I support the war and I believe that women should go and protect America too.

NS: My caution is that a woman could be a mother, and forcing her out of a home would be a hindrance to a child’s growth. I can’t say that I’m for an outright draft because of this. I know that protecting freedom is very important. We need to keep our children in mind.

Q: You [Nick Schreiner] are in support of nuclear energy. How do you propose to handle the disposal of wastes and how would you regulate it?

NS: We are working for technology, trying to figure out how to make nuclear waste less dangerous. I’ve heard Japan is buying nuclear waste actually. Private enterprise will get out of hand without government regulation on this.

LB: I am for nuclear energy. I don’t know enough about the waste. I do know that it won’t pollute the air, but a big disaster could be bad.

Q: What do you plan on doing to increase revenue flowing into smaller towns for roads, small businesses, etc.?

LB: I’m going to have to pass on this one.

NS: Small towns are important to America. Nebraska wouldn’t be Nebraska without small towns. I’d like to help with small business purchases. We can work to give purchase incentives to smaller businesses. By doing this, we could increase revenue.

Q: Have you ever lived in a small town? I don’t think this is the way to going about raising small town revenue.

NS: I attend a small school in Seward and have a smaller class than most of you here. As a state official, I can’t really dictate how a town regulates its revenue through entertainment, etc.

LB: My town is 12,000 people. We opened ethanol plant 5 years ago, but the company went bankrupt so we lost 40 jobs and the city lost money. Money is being added on to a hospital, but it’s all through donations. We have a Casey’s and one grocery store. Not sure how we’d increase revenue.

Q: What are your views on capital punishment and physician-assisted suicide?

LB: I’m not totally for the death penalty. It costs a lot of money to shock or drug people to death. If I were to support it, it would only be if it were cheaper than paying for a person to live in jail for life.

NS: I disagree. There’s a cost to justice. Justice is worth more than anything. If you don’t prosecute people, your society will fall down. The death penalty should be handled very carefully.

NS: This is a tough issue. I don’t agree with evolution. I believe in intelligent design. We should teach both sides of the issue. We can’t be biased to one side.

The closing statements generally just addressed the week as a whole and the candidates expressed their gratitude for being here this week. Tomorrow’s debate will begin at 9:30AM with the election to be held at 11:15AM.

To read about the primary election, click the candidates’ pictures below:

Congratulations to the following people who have won elections and positions in Washington County.

Clerk of the District Court: Adam Vogel and Andrew Sheridan